[Bot:] Sue Denim (not her real name) joined The Body Shop At Home about six years ago in Australia, and had a less than enjoyable experience.  She has kindly offered to share her story so that people considering joining can see what can happen.  I am not saying this will happen to everyone who joins or that all ‘consultants’ are going through this. This is her story, and she wants you to understand what happened to her.

[Sue:] Thank you. I was fresh on 19, and looking for work. I’d never heard of multi-level marketing before — sure, I knew some of the companies by name, but I didn’t know that they were bad or that they prey on the weak. It was November 2012, so all the usual MLMs were putting out advertisements for their Christmas gear. The sister of a good friend of mine was hosting a Body Shop party, and I agreed to go along for my friend. I don’t mind The Body Shop (TBS) products, so whatever, you know? During the party, I was asked if I’d like to host a party for a $50 voucher. I didn’t have a lot of money, so I agreed. I got some nice shampoos and invited some family over for a party. Then it began.

“You know, you’re doing so well at this. I think you’d be great doing this as a full time job. I heard you’re looking for work.”

I was excited to have essentially had a job opportunity fall into my lap like this. Plus, I get to use lots of TBS products? Essentially just chill with people in their home and let them sample things? Sounds good to me! All I had to do was invest $300 in my starter kit? Well… I didn’t really have the money, so I took out a small loan of $500 for my kit and whatever else I may need.

[Bot:] For those of you who are wondering what else Sue may have needed, have a look at this picture of a Body Shop At Home consultant and note all the things she has purchased. 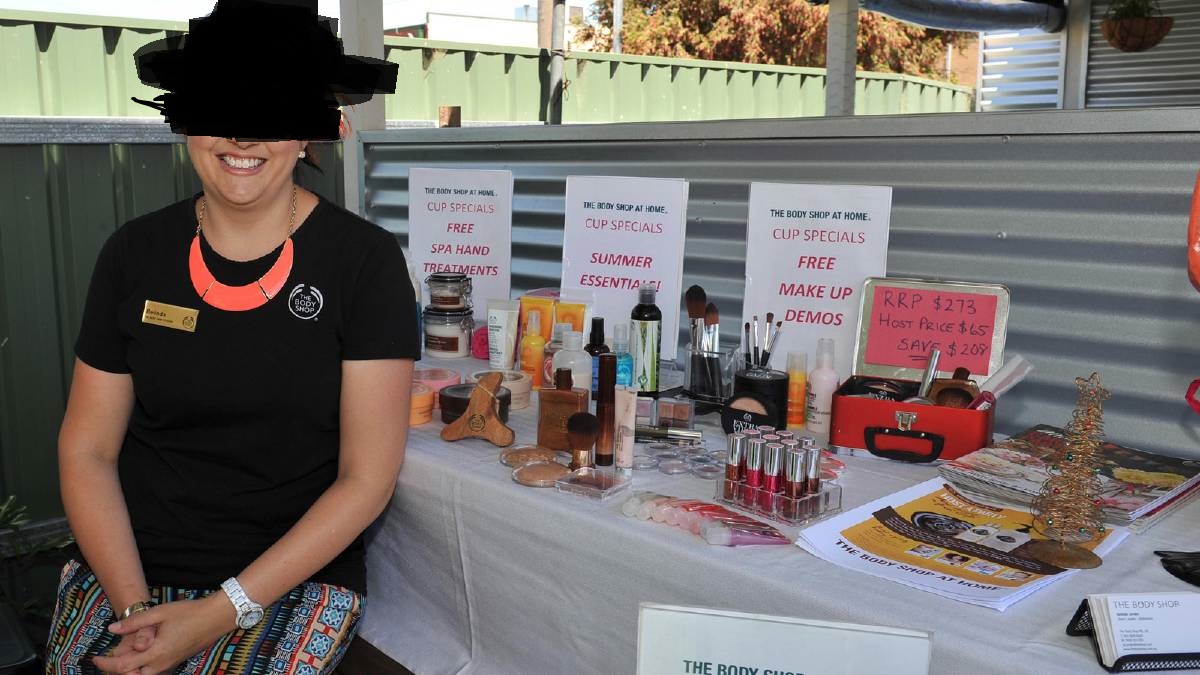 [Sue:] I was invited to a training session on the other end of the state, so I drove there for it. It was a two hour trip to the location, and at the door, they charged me $70 for my training. I couldn’t believe it. I was irritated that it wasn’t specified, but all the uplines seemed nonchalant. “Well, you’re making SO much! TBS provides! You’ve got the extra cash now, surely!”

The training involved a lot of how to recruit people, and had some of the more successful uplines in my state come and brag about how much money they’d made through their “teams.” They showed off how rich they were and I found it very distasteful. The other part of it was learning about the products.

I hadn’t hosted a single party, other than my initial one. I made a whopping $14 at that party. My team leader began to call me up to three times a day to see if I had made any sales. She asked me why I hadn’t been posting on Facebook. She gave me a list of degrading chores, which involved wearing Christmas costumes and going door-to-door in my neighbourhood asking if people would like a party. There was also a “chore” that had me calling businesses *during work hours* to harass the staff and see if they wanted parties. During their damn work hours!

Over the course of the next month, I held a handful more parties. One of them, I didn’t even make a sale. These women just had me come in and let them use all the products and kicked me out. In total, I “worked” for The Body Shop for about three months, and ended my time with them a good $700–800 in debt. I had to buy my own uniform. My own order forms. Not even the pens were free; they provided absolutely nothing.

[Bot:] This is not unusual in MLM, but the uniform sounds a bit different. Do you mean an actual uniform or just clothes that you can work in?

[Sue:] The uniform was a black shirt that had TBS logo on the front and some silly positivity quote on the back and was purchasable from their consultant website.

[Bot:] I found an example of one of these tops. Note the seasonality of it, rendering it useful for only a few weeks.

[Sue:] They were big on seasonal uniforms. So, when I joined, it was Christmas – they had Christmas themed uniform shirts for $30, but you couldn’t wear them after December 25th. They also had shirts available for limited edition products, which had a three to six-month life span, depending on the product. I picked up a standard logo shirt because I didn’t see the point in having a hundred different shirts. But some people really did have a lot – upwards of ten, if they’d been with the company a long while!

The thing about The Body Shop is that having it as an MLM makes no sense. I live in a very small area. In my city and the surrounding suburbs, there are around 250,000 people. There’s one huge retail store in the middle of the city, and God knows how many MLM reps. The oversaturation is immense. Why would anyone host a party, anyway? They rarely get a benefit from it. A $50 voucher is just a way to reel someone in to spend $800 on top.

[Bot:] I often wonder that myself.  MLMs don’t seem to think oversaturation is a problem. It clearly is though! If you could browse all the stock in a shop and buy it straight away, why would anyone want to buy from an MLM rep? I suspect no one wants to buy this way, they just go to these parties to ‘support’ their friend or go to meet up with others and hope they don’t have to spend too much.

[Sue:] In the end, I blocked my team leader and all the uplines in every imaginable way. Twitter, email, phone, Facebook… I even told my housemates not to answer the door to them. I simply dropped off. I posted on my profile apologizing for any aggression and revealed the level of pressure that was put on me constantly during those three months. I don’t think I actually lost any friends because of it.

[Bot:] What would you say to anyone thinking of joining an MLM?

[Sue:] The only comment is: don’t do it. You will get nothing from it. Why would anyone have a party with you when the stores exist? Why? Ask yourself that.

[Bot:] Thank you, Sue, for sharing your story.

Reader, I hope you found her experience useful. If you would like to learn of others’ experience, read Timeless Vie’s informant’s tale.

To The Body Shop, I would say it is a shame that a company that is held is such high regards ethically, participates in such an unethical ‘business model’ as MLM. You are well known for your good products, high profile image and ethics (animal cruelty and fair trading). I can only hope that one day you will live up to this Twitter account’s image.

We’re often asked how to help a loved one leave #MLM. Perhaps the place to start is to understand what influences someone to join and stay in their MLM. There is more info on our FB page #antimlm #influence https://www.canva.com/design/DAEjYo6ipfU/y4TcXtq5Zc3u9RFcGDG7VQ/view?utm_content=DAEjYo6ipfU&utm_campaign=designshare&utm_medium=link&utm_source=publishpresent

Can anyone U.K. based help Alex with his article on the nasty practice of #MLM and reps approaching seriously ill people with promises of symptom relief or even cure. #quack #diagnosis #falsehealthclaims #scam #antimlm #antimlmmovement #student #media https://twitter.com/AntiMLMwriters/status/1416748619437334529

Have you been approached by #MLM reps claiming they have the cure or treatment alternative for yr serious illness? #Journalism student Alex is keen to interview any1 in U.K. who’s happy to share their experience of this: alexforbes000@gmail.com #antimlm #COVID19 #healthclaims

Do MLMs have an image problem that they don't want us to know about?They frequently market themselves as tools for female empowerment, but the corporate executives are the ones making stable incomes in these groups and they're certainly not majority female.www.canva.com/design/DAEkvc1etrs/EXTURGrtblGTASFcNEvNZg/view?utm_content=DAEkvc1etrs&utm_campaign... ...

Alex is a journalism student and he is keen to interview anyone in the U.K. who is happy to share their experience of being approached by MLM representatives making claims their products can cure serious illness or conditions. Or perhaps you know someone who has had this experience with an MLM representative?Alex can be contacted on alexforbes000@gmail.com ...